Puffins and so much more…

There is nothing quite like a seabird colony. In my humble opinion, they are one of the UK’s greatest wildlife spectacles – nowhere else in the country would you find such an impressive array of bird species all crammed together in one space, and in such great numbers. Visiting one is an assault on the senses. A cacophony of screeches, shrieks and grumbles, combined with the overpowering stench of rotting fish and ammonia, accompanies the awe-inspiring sight of thousands upon thousands of birds all swooping, circling and jostling for space against the dramatic backdrop of a sheer rock face, the sea frothing and seething beneath. If you can brave the wind and dizzying heights, a seabird colony is well worth a visit.

Just down the road from me in Aberdeenshire, a little way past Stonehaven, is one of the best and most accessible colonies in Scotland. Fowlsheugh was bought by RSPB back in 1976, and is designated as an IBA, SAC and SSSIon account of its impressive seabird colony. Even more impressive is the fact that at only 10.15 hectares in size, Fowlsheugh has one of the densest bird populations in Europe, which makes it not just nationally, but internationally important. I’d heard great things about Fowlsheugh and was determined to see it for myself, not least because it offered prime opportunity to spot a species which had always evaded me in the past – puffins!

Scotland seems to have hurtled straight from winter into summer, and the lengthier, warmer evenings made a trip to the wind-torn cliff top reserve even more appetising. It was also mid-May: the ideal time to observe seabird colonies, as many species come back inland to roost after a long, hardy winter out at sea. I arrived during the golden hour; that magical time when the sun melts like warmed butter into the horizon, and the sky is streaked with pastel blue and ruby pink. The sea was flat calm, and the faintest of breezes carried with it the tropical scent of the gorse bushes, which had sprang fervently into life, decorating the coastal paths with their cheery yellow buds. I’d booked on to a guided puffin walk, which were being run weekly by the RSPB to herald the arrival of Britain’s favourite seabird to the mainland. In all my years as a wildlife enthusiast, I’m ashamed to say I’ve never seen puffins up-close, despite having lived by the sea all my life. I hoped that taking a trip with an expert would help – plus it provided ample opportunity to learn about the other birds on the reserve, as well as the reserve history. Our resident expert, Mark, was brilliant, and delivered all that information and more as we meandered our way along the narrow wee path that wound its way along the headland.

We walked through tussocky grassland, coloured with early summer wildflowers; dainty yarrow, common rock-rose and …. The occasional kittiwake would rise up on the wind beside us, calling out the distinctive cry of their namesake, before swooping back down out of sight. As we approached the first colony the sound began to grow, like the early tremors of a distant earthquake – thousands of voices chattering and screeching at one another, a wall of noise that advanced with every step. Abruptly, the path swung to the left and the earth opened, revealing a 30ft vertical drop and the colony in all its glory. The feeling was just as I remembered from childhood school trips; the slight dizziness of looking down from such a height, the awe at being presented with so many animals all at once. There were birds everywhere the eye could see. Crammed onto every rocky shelf, wing-to-wing, like jam jars on a well-stocked shelf; crawling precariously along ledges, wings held aloft for balance. The airspace in the middle of the bay was a flurry of activity, with birds zooming in and out or just circling, surfing the air currents. I lay on my stomach and inched as close to the edge as I dared, simply watching the comings and goings of this bustling natural metropolis.

Each species had its preference for living arrangements. Down nearer the bottom resided the guillemots, crowded together in great numbers, jostling for space on the teeniest of ledges. Ranging from chocolate brown to black, with a white chest and tiny white bands around the wings, they were easily the most numerous birds there – and the rowdiest. Craning their elongated necks around one another to shout down the line, they would scramble for space as another flew back in from the sea and wedge itself among the jostling bodies.

Razorbills were clustered here and there in much smaller groups of four or five, hanging about on exposed crevices and seemingly having competitions over who could call the loudest. Whilst their monochrome plumage is similar to that of the guillemot, they are much squatter, with geometric white markings extending down the face and along the beak. 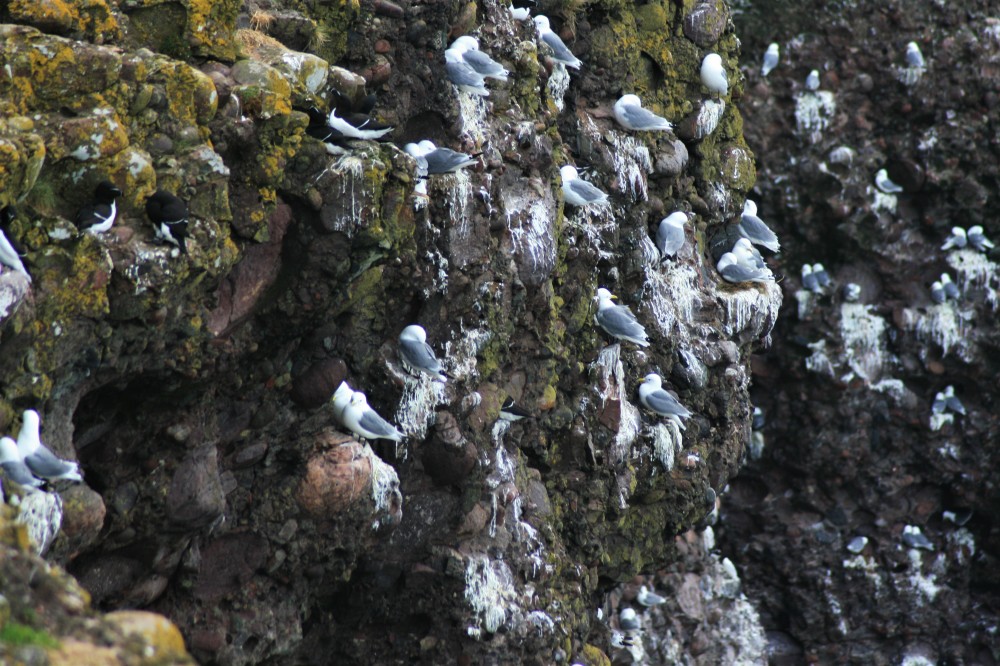 Higher up on the cliff were those who preferred the more sophisticated way of life, looking down on the raucous colonial breeders. Kittiwakes nested in neat pairs on minute ledges, which were sometimes so small that the nest material hung out over the edge. Watching them gave a little insight into married life. Busy, harassed looking parents would hurry in and out, either heading out to find food or returning with the days catch. How this was received by the mate varied; sometimes, she would be gracious and welcoming, nuzzling into her partner’s neck. Other times, she would flap her wings in annoyance and nip at him, at which point he would swiftly turn and swoop back out to sea, leaving the apparently fussy eater behind. The offended individual would remain, plump and brooding, looking a little irritated at being left behind.

Even further up – in the “penthouse” suites – were the fulmars. I spotted one female sitting far apart from the hustle and bustle beneath, looking serene in her solidarity. Fulmars are beautiful birds, close relatives to the albatross, with great, soaring wings made for long stretches in the air. They share the grey and white colouring of gulls, but are larger and have a distinctive tube-shaped structure on the top of their beak, which functions to remove excess salt from the body.

I could have stayed and watched this enormous colony all evening; their interactions, the way they caught and rode the thermal currents of the air, or divebombed into the crashing surf below. But Mark announced we were to go “next door” to see the second colony, where, he assured us, were puffins. A wee wander further, and we were there. This colony seemed slightly smaller and a little less rowdy, but luckily this made it easier to spot them – there were definitely puffins, dotted here and there. Some lined the mouth of a cave carved into the rock face. Others teetered about grassy ledges, peering comically over the edge with a look of seeming uncertainty. It’s easy to see why the nation loves them. They are hugely characterful, bumbling to and fro on bright orange legs and oversized feet, with their round, button-black eyes and enormous, candy-striped beaks. As we watched, more would come into land with their feet splayed out in front, like overzealous long-jumpers. I finally managed to grab my close-up shot; lying flat on my stomach, and peering carefully at the ledge beneath, hardly daring to breath.

It’s fair to say that my time at Fowlsheugh was a success. Mark was a fantastic and informative guide, and the time of day, coupled with the weather, lit up the cliffs and their charismatic residents perfectly. However, it is important to remember that seabirds – like many other bird species – are in decline. Even at Fowlsheugh, numbers are decreasing, because the reasons are occurring out with the protection we can lend these species on land. Many of them rely on fish species – like sandeel – as a food source, yet over-fishing has caused this essential resource to be depleted. This, coupled with climate change, is endangering our breeding seabird colonies – many species are now red or amber listed. 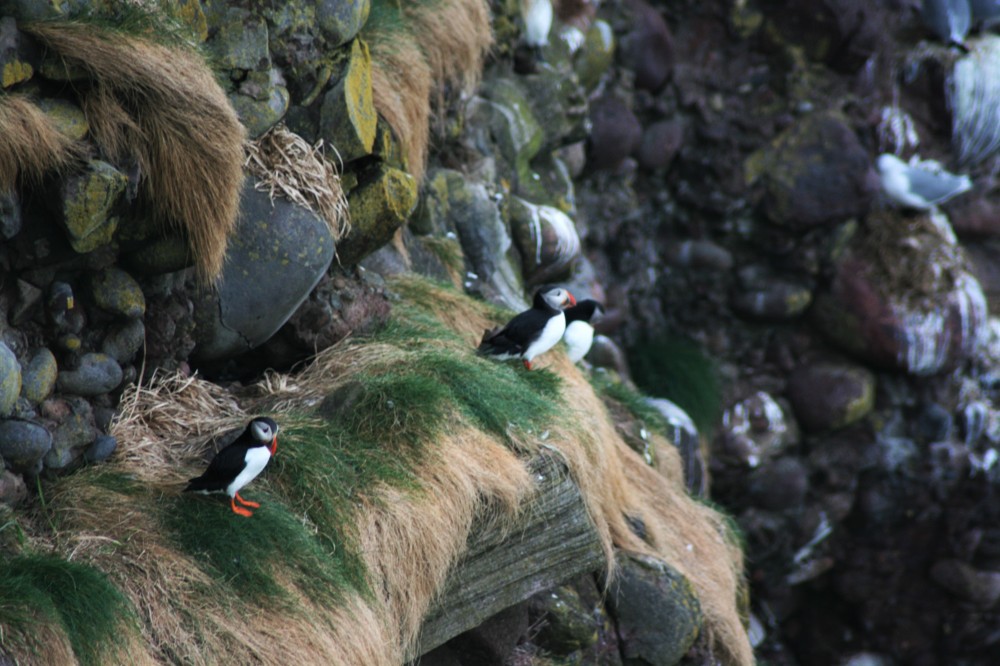 The good news is that seabird colonies, like Fowlsheugh, are littered around our coastline. Bempton cliffs, the Farne islands, Bass Rock, South Stack Cliffs…the list goes on. A great way to sight multiple species, and observe wild birds in their natural habitat from above, so they remain undisturbed, and you get a great view! Just watch out if you have vertigo, or a sensitive sense of smell…