Seals seem to have played a large part in my zoological career. I spent a very enjoyable two year stint as a marine zoologist for an aquarium, which involved caring for and training four fully grown grey seals, and these irresistibly lovable animals were at the centre of my dissertation. Perhaps it has something to do with my attachment to dogs – to whom our pinniped friends are so undeniably similar in character – but I formed an instant fondness for the soulful eyes, rolls of blubber and happy-go-lucky nature of these creatures.

My dissertation was based at the Ythan estuary, about a thirty minute drive north of Aberdeen. It is part of Forvie Sands Nature reserve and is an incredibly important ecosystem, supporting a diverse network of estuarine life. The mudflats in particular are species rich, boasting populations of Hydrobia and Euphausiids, amongst a variety of others. These in turn attract a stunning array of shorebirds, from redshanks to terns. Four species of tern utilise the Ythan’s bounty, most commonly the sandwich tern, the population of which amounts to just over 1000 pairs. During the breeding season Forvie Sands is closed to the public to allow the colonies of rare terns a chance to settle down in private. During my dissertation I was lucky enough to be allowed access to these colonies by the ranger, Annabel Drysdale. After an incredibly bumpy ride across the sand dunes in her rusty old Land Rover, we were richly rewarded by the spectacular sight of a busy tern colony containing not only sandwich and common terns, but also the much rarer little tern. 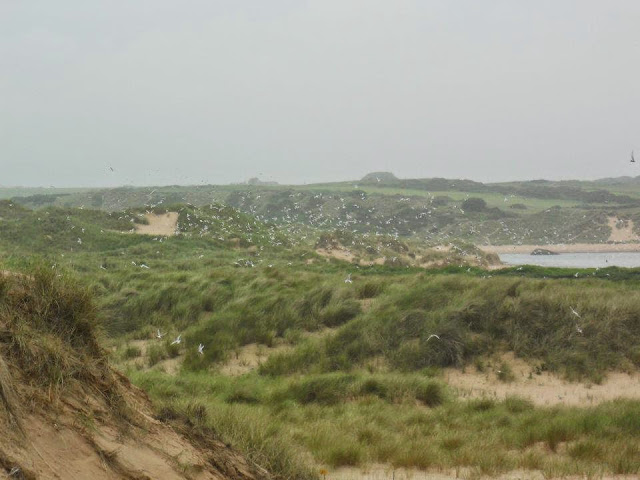 And of course, my absolute favourite the eider duck – who, as I have mentioned before, have my favourite call of any bird, sounding somewhat akin to a pervy builder eyeing up the local talent – reside at the estuary in vast numbers. In fact, the reserve boasts the largest breeding colony of these birds in the UK.

On top of this, Forvie Sands also contains one of the largest populations of seals in the British Isles. Although accurate counts are difficult to come by, the last estimate stated a number exceeding 1000. When you first encounter this vast, sprawling mass of pinniped bulk, your brain almost can’t compute it. Rounding a corner through the dunes, a wall of mottled grey greets you accompanied by a chorus of grunts, groans and howls (you could almost be forgiven for imagining a pig farm would be waiting for you). And for every ten seals you can see on land, one will be bobbing about in the water – quite difficult to spot at first as they blend in perfectly with the steely grey of the seawater. But once you’ve spotted one, it’s a bit like Where’s Wally; suddenly lots of little dome shaped heads pop up out of the water, eyeing you with a calm indifference. 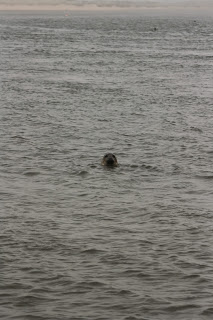 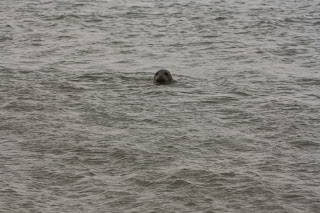 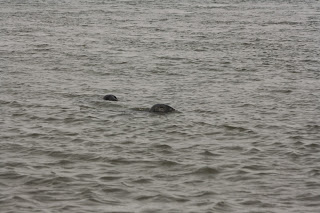 The majority of the population is made up of grey seals. There are two species of seal commonly found in Britain – grey and harbour. Grey seals are generally larger in size, with a flat, ‘roman-shaped’ nose and v-shaped nostrils. Harbour seals have the classic, perhaps ‘cuter’ Labrador face we associate with seals and tend to be smaller and lighter in colour. I did notice a small population of around 10-15 harbour seals who always seemed to remain separate from the bustling mass nearer the estuary mouth. There isn’t much evidence to say that grey seals bully their canine-like counterparts, but perhaps the fact they don’t intermix is the reason why.

My dissertation largely involved myself and two of my zoology course mates sitting on the beach with some binoculars observing the seals’ movements everyday for a month straight. You may think that chilling on the beach in summer sounds like a fantastic way to spend a month, but clearly you do not live in North East Scotland. In the rare moments it was not a torrential downpour, it was gale-force winds or bitingly cold. And on top of this, we’d only had enough money to buy a two-man tent, which meant taking it in turns sitting outside wrapped in a bin bag to protect our notebooks (and who said being an ecologist wasn’t glamourous?). But we grew to love watching the behavioural antics of our subjects, who lounged and lazed to their hearts content despite the weather. Seals have a wonderful relaxed attitude to life, and will move only to have a leisurely stretch, curling up their back flippers and leaning back the head in a characteristic display of incredibly slow gymnastics. Occasionally, one or two would make the cumbersome journey of hobbling across to a new spot or perhaps (a very exciting event to us as we froze in our tent or bin bag) a few of the enormous males would become locked in battle. However, these fights would only last for a few minutes before the lesser male would give in, yawn, and return back for a well-deserved nap. Seals on land even blink slowly. 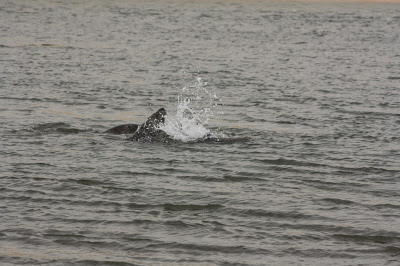 Seals in the water are a different story. Anyone who has witnessed the clumsy, awkward struggle of a seal moving on land can relate to the surprise of the smoothness and grace of their aquatic acrobatics. Seals are also notoriously inquisitive and individuals at the Ythan can be observed following dog walkers up the beach, sometimes coming within a few feet of people standing in the shallows. This curiosity has unfortunately got the seals into trouble a few times, especially with the angling community. Recreational salmon fishing is a big past-time at the Ythan and therefore conflict as emerged between the angling society and the vast seal population, a topic which was the concern of my dissertation. I spent a lot of time talking with fishermen, who strongly believed the seals were feasting on salmon and posted a threat to anglers in boats. Data on salmon stocks for the Ythan showed salmon numbers were actually on the rise, however many individuals would come very close to the boat, sometimes even swimming underneath. A male gray seal can grow up to 7m in length; it is easy to see why some anglers might be intimidated by a wild animal of substantial size showing a keen (if albeit harmless) interest in their distinctly small fishing boat. A cull is forever being proposed but, thankfully, has never been allowed. 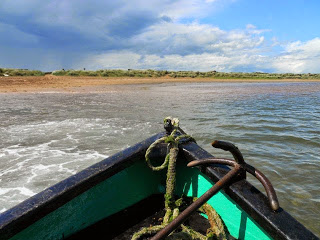 I, for one, cross my fingers that it never will. I naively hope for the day that the fishermen accept they are in the seals’ territory, stealing the seals’ food from underneath their noses, and realise the seals themselves don’t bear a grudge. In fact, they’ll just shrug, sigh and relax onto a comfortable spot on the beach. Maybe we should all take a leaf out of their book…